Skip to content
HomeTools of the Trade: Schiavona, Oakeshott Type 2a

“Tools of the Trade” is an ongoing series highlighting antique weapons/equipment pertaining to Western swordsmanship. It will feature hi-res photography and statistics, but also will address the tools from a martial artist’s point of view. Click on each image for the full resolution.

The Schiavona (pronounced “skee-ah-VOH-nuh”) class of weapon is primarily defined by it’s distinctive basket hilt. The weapon developed from the late 16th century and was continually produced into the mid-18th century. It was first introduced by Slavic mercenaries hired by the Doge (Duke) of Venice, and became a mainstay of Venetians. The Doge’s palace still holds many of these weapons on display today. The blades can vary from broad cutting weapons to narrow rapier-like ones.

This particular weapon is very light in the hand, and defies the misconception that basket hilted swords are supposed to be heavy. The grip is covered in ray skin, which provides excellent traction. There is evidence that there may have once been a twisted wire around the spiral groove that rotates around the grip, which would have given even more traction, but this wire wrap has been removed at some point of the sword’s life (a practice that was not uncommon in the Victorian era). There is also a thumb ring that allows the user to really keep a strong grip on the weapon. The thumb ring also enhances the maneuverability of the sword when making cuts and parries. While it is possible to wrap the forefinger around the ricasso, the thumb ring makes this unnecessary, and in fact the blade is just sharp enough at the ricasso to make using the forefinger uncomfortable.

The sword has a balance that is neither too cut focused nor too thrust focused, feeling equally balanced for both actions. It feels quite right in the Bolognese style of fencing, despite being made later than the surviving Bolognese treatises. Going through the Bolognese assalti (the pre-arranged forms in the Bolognese system) feels quite nice, and this sword would feel right with or without an off-hand weapon such as a buckler. The blade is quite thin, and would likely have been very sharp in period, although it does not feel like a true-cutter in the way that many other broader, forward-balanced Schiavone do.

The brass pommel has the typical “cat’s head” shape seen on many Schiavone. It has a decoration that consists of a round knob surrounded by a circle of eleven identical smaller round knobs. This is likely merely decorative, though it is possible that there is a meaning to this symbol that has been lost to time.

The engravings on the blade read “S-O-L-I  D-E-O” on one side and “G-L-O-R-I-A” on the other. This Latin phrase means “Glory unto God Alone”, and was a popular phrase throughout the Renaissance (and possibly earlier). It eventually became one of the “Five Solas” that summarized the beliefs of the Reformers during the Protestant Reformation, which is generally accepted to have ended in 1648. This would fit the time period of the weapon, although the phrase was also used long after the Reformation, so it cannot reliably be used to date the sword 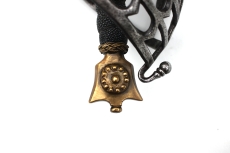 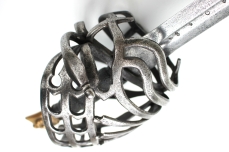 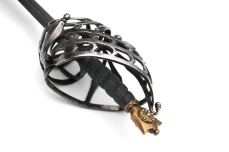 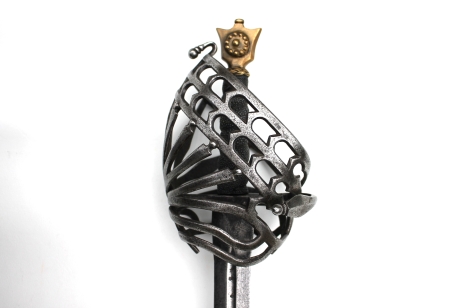 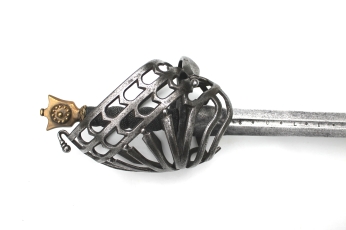 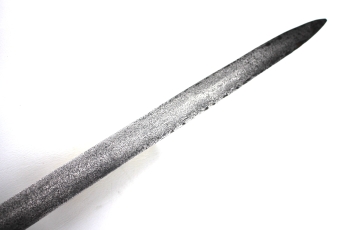 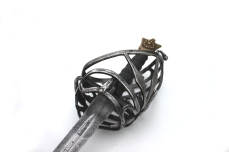 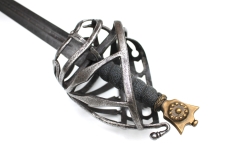 About the author: Bill Grandy is the Director of Historical Swordsmanship at the Virginia Academy of Fencing, where he has taught professionally since 2001. His HEMA studies began in 1998 (back before anyone called it “HEMA”), though he practiced modern sport fencing since the late 1980’s, and spent most of the 1990’s practicing Aikido before eventually giving up both when he found his true passion with the historical western fighting styles. His specialties are the German Liechtenauer tradition of swordsmanship as well as the Renaissance Italian rapier, though he tries to find time to work with numerous other weapon arts whenever he can. Bill has traveled extensively to study both period fencing treatises as well as antique arms and armor, and he is also invited regularly to teach at major HEMA events.