Skip to content
HomeShould You be Training with an Extra Heavy Sword? 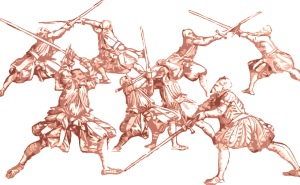 Many practitioners of sword arts praise the use of training with a much heavier weapon than their normal one. The general argument is that doing so is good for conditioning as well as to train more explosive speed when switching back to the normal weighted sword. Certainly, this attitude can be historically justified: Vegetius wrote of using heavier weapons to train against targets in 4th century Rome, and even on the other half of the hemisphere the Japanese sometimes used a heavier wooden sword called a suborito for strength training. There is a strong case to be made, however, that this method causes more harm than good. In fact, the data shows that a practitioner may be better off doing the exact opposite and train with a weapon that is lighter than their normal one.

The Loss of Precision

In baseball, it is quite common to see players use weighted bats for the exact reason some swordsmen do. Similarly, they will sometimes use a normal weighted bat and tie it to a rubber exercise band for resistance to simulate a heavier one, something that some HEMA practitioners are now advising. Players also like to do this as a warm-up to “prime” the muscles right before going to bat during a game. On the surface, it seems to make sense that swinging a heavier bat (or sword) will make using a lighter one much easier, right?

According to the research, the opposite is true. In fact, it is becoming the norm for baseball coaches to stop their players from doing this. Studies from the last couple of decades show that the benefits are all in the players’ imaginations. In the book Motor Learning and Performance, authors Richard A. Schmidt and Timothy D. Lee talk about the findings:

“…eight baseball and softball players attempted three sets of 15 bat swings during which they hit a ball suspended on a cord. Batters performed the first five swings and the last five swings in each set with a regular (nonweighted) bat and the middle five swings with a weighted bat. They were asked to estimate swing speed and bat weight (compared with the speed and weight they perceived during the first five unweighted swings) following the fifth weighted swing and after the first, third, and fifth unweighted swings. Actual swing speeds did not increase following swings with the weighted bat, but batters perceived their swings to be faster and their bats to feel lighter. For five of the eight participants, this illusion lasted for at least four unweighted swings. In another study (Southard & Groomer, 2003), the normal swing pattern of experienced batters was found to be altered and their swing speed slowed down for up to five swings following a warm-up with a weighted bat. The results of these studies suggest that batters would be better off taking warm-up swings with their normal (unweighted) bat than with one that is considerably heavier.”

In addition to the placebo effect, the research shows that a baseball player who trains with a heavier bat is merely training to be better at using a heavier bat, but not really improving the hand-eye coordination of using a normal weighted one. The muscles used for a bat that has a different point of balance and heft are different enough that the body needs to recalibrate when switching to a lighter one. This makes training with a heavier bat superfluous at best. Worse, it means that when switching to the lighter bat, the swings are more likely to be less accurate while the body is adjusting to the difference, and the athlete is more likely to use too much force, and with less precision. The athlete might be stronger, but at a loss of technical ability.

What do experts say is better? When training strength, put the bat down and use traditional strength and conditioning exercises (push ups, weights, etc), which do not confuse the muscle memory of swinging something that is so similar feeling yet still different. When training with a bat, the science encourages players to use a combination of a normal weighted bat as well as sometimes using an even lighter one. The lighter one is especially useful for warming up. The lighter bat allows the athlete to focus on fine motor control and accuracy rather than strength training, skills that will transfer up to a heavier bat but don’t always go the other way around. Further, this is also useful for preventing overstraining the muscles and causing injury (see below).

The translation from baseball to swordsmanship should be very clear. A martial artist using a weighted weapon is not actually getting better at using a normal one. Intentionally forcing the body to use a much heavier weapon is a hindrance, not a help. It is more efficient for the swordsman to separate endurance and strength training from technical training to gain the maximum results.

Repetitive stress injury is a problem in many sports, particularly ones that involve swinging an object repeatedly. The most famous version of this is lateral epicondylitis, or what athletes often call “tennis elbow”. It can happen regardless of the weight of the tool being used, but the heavier the object, the higher the potential for injury.

In sports the problem is not primarily caused from competing, but rather from training. Training requires an athlete to repeat the exact motion over and over. A swordsman who trains with a heavier weapon and then switches to a lighter weapon for fencing is causing more harm than one who does the opposite. Again, the solution is for strength and conditioning training to be separate from technical drills.

The use of a heavier sword is especially dangerous for students who have former injuries. There are unfortunately instructors of various martial arts (not just HEMA) who will encourage students with problem wrists or elbows to use a heavier weapon to rebuild the strength that they have lost. This can cause old injuries to never properly heal for the rest of the student’s life. For technique training, these students should be using much lighter weapons to ensure that they are still training proper form and precision without undue strain. For rehabilitation from their previous injuries, they need to consult a physical therapist about what exercises they should be doing to rebuild strength. An instructor advising otherwise is acting irresponsibly.

There are many who would argue that the modern practitioner of HEMA needs to be doing what our ancestors were doing. Earlier in this article it was acknowledged that Vegetius in the 4th century advised using heavier weapons for training, and one might argue that if our ancestors did it, then so should we. Unfortunately, this would be cherry-picking historical evidence. One of the problems is that most of our written historical records from period fencers and masters do not say anything about training weapons. This means that while we know what some people preferred, we just don’t know if the vast majority of people throughout all time periods had a strong opinion one way or another.

One historical source that shows a specific preference comes from the Italian Captain Settimo Del Frate, in his 1872 sabre treatise. Del Frate encouraged students to use a training sword that was lighter than a real one. His argument centers on the fact that a student can train for longer periods of time developing fine control and precision without fatiguing the arm as quickly, and this practice can later be translated to a heavier sword. This seems to be in line with modern scientific evidence.

Now, in stark contrast to Del Frate, his contemporary Alfred Hutton in England specifically chastised the Italians for using lighter training weapons, and instead favored using a heavier one, showing that the attitude towards weight was not universal. Regardless, one cannot dismiss either attitude based on historicity since clearly both attitudes existed.

What this Means for You

If you already train with extra heavy weapons in preparation for a lighter one, no one is stopping you from continuing to do so. You should keep in mind, though, that the science behind doing so is showing that there are easier and more efficient ways to accomplish your strength and endurance that will ultimately make you a better martial artist. Pushups, deadlifts, weighted squats, and any number of classic strength training exercises will help you develop explosive speed and strength with far fewer adverse effects than a heavier sword. Using an extra light sword (at least on occasion when not using your normal weighted one) will help you to develop your fine motor skills more efficiently than with a heavier sword. Ultimately, the case for using heavier weapons for training seems to be more detrimental than not.

About the author: Bill Grandy is the Director of Historical Swordsmanship at the Virginia Academy of Fencing, where he has taught professionally since 2001. His HEMA studies began in 1998 (back before anyone called it “HEMA”), though he practiced modern sport fencing since the late 1980’s, and spent most of the 1990’s practicing Aikido before eventually giving up both when he found his true passion with the historical western fighting styles. His specialties are the German Liechtenauer tradition of swordsmanship as well as the Renaissance Italian rapier, though he tries to find time to work with numerous other weapon arts whenever he can. Bill has traveled extensively to study both period fencing treatises as well as antique arms and armor, and he is also invited regularly to teach at major HEMA events.