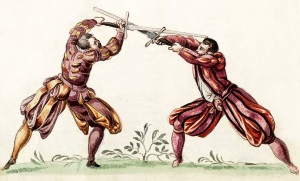 Vor and Nach. These two terms are constantly referred to in the various Liechtenauer teachings. On the surface the definition seems simple: The person who has seized the Vor (the “Before Timing”) is usually described as the fighter who has made an attack, whereas the person in the Nach (the “After Timing”) is the person who is forced to defend. Time and time again the treatises tell us to seize the Vor, and to not be the person who stays in the Nach. By this logic, it would seem safe to assume that to win, one should attack first and keep attacking at all costs, right? END_OF_DOCUMENT_TOKEN_TO_BE_REPLACED